Sri Lanka’s Economic Crisis - Everything We know Till Now!

What happened in Sri Lanka?

The Sri Lankan economic crisis is an ongoing crisis in the island-state of Sri Lanka that started in 2019.

It is the country's worst economic crisis since its independence in 1948. 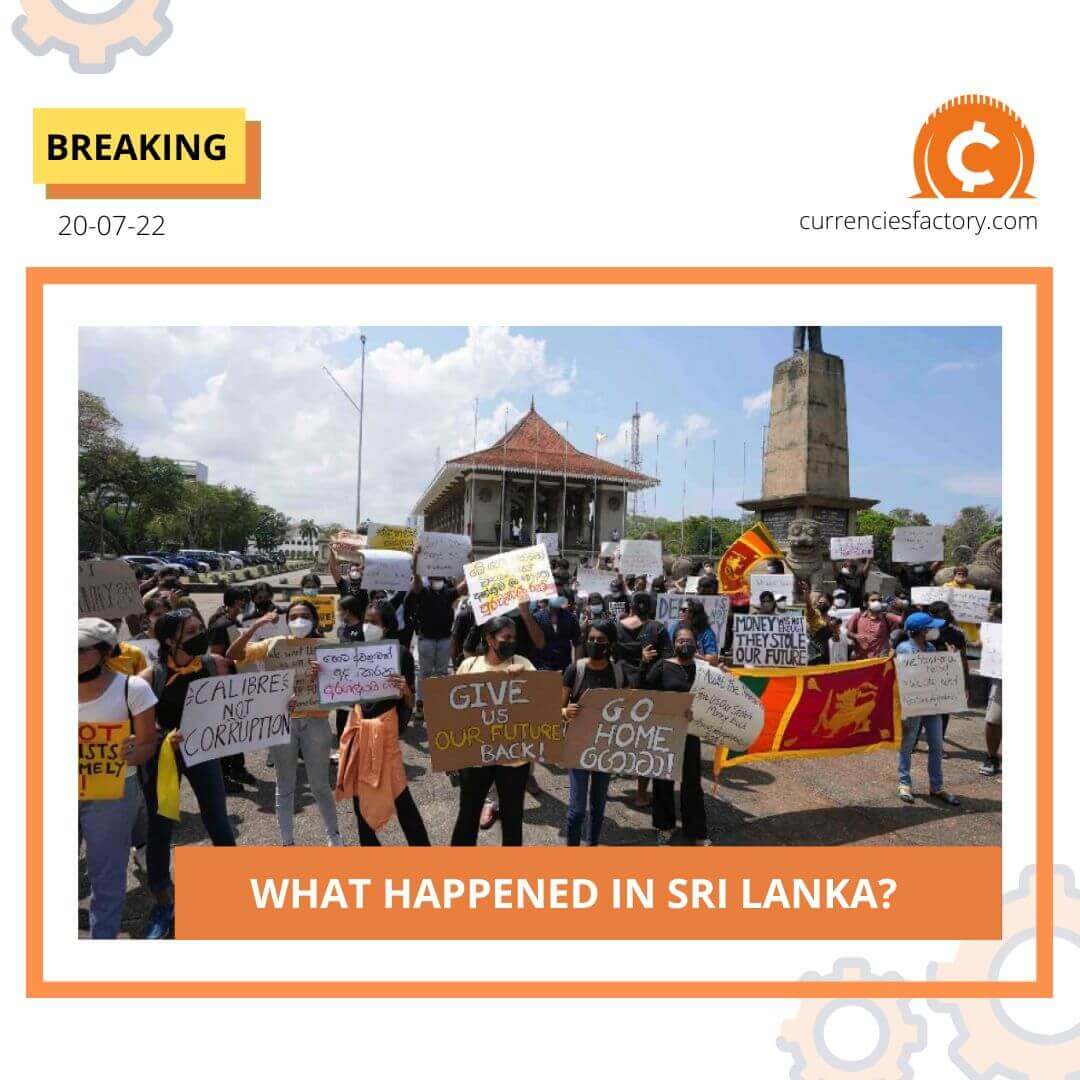 It has led to unprecedented levels of inflation, near-depletion of foreign exchange reserves, shortages of medical supplies and an increase in prices of basic commodities.

The crisis is said to have begun due to multiple compounding factors like money creation, a nationwide policy to shift to organic or biological farming, the Easter bombings in 2019, and the impact of the COVID-19 pandemic.

The subsequent economic hardships resulted in the 2022 Sri Lankan protests.

Sri Lanka had been earmarked for sovereign default, as the remaining foreign exchange reserves of US$1.9 billion as of March 2022 would not be sufficient to pay the country's foreign debt obligations for 2022, with US$4 billion to be repaid.

An International Sovereign Bond repayment of US$1 billion is due to be paid by the government in July 2022.

Bloomberg reported that Sri Lanka had a total of US$8.6 billion in repayments due in 2022, including both local debt and foreign debt.

In June 2022, Prime Minister Ranil Wickremesinghe said in parliament that the economy had collapsed, leaving it unable to pay for essentials. - en.wikipedia.org

What is the current situation in Sri Lanka?

Rajapaksa sent his resignation to the parliamentary speaker, moments after he arrived in Singapore. 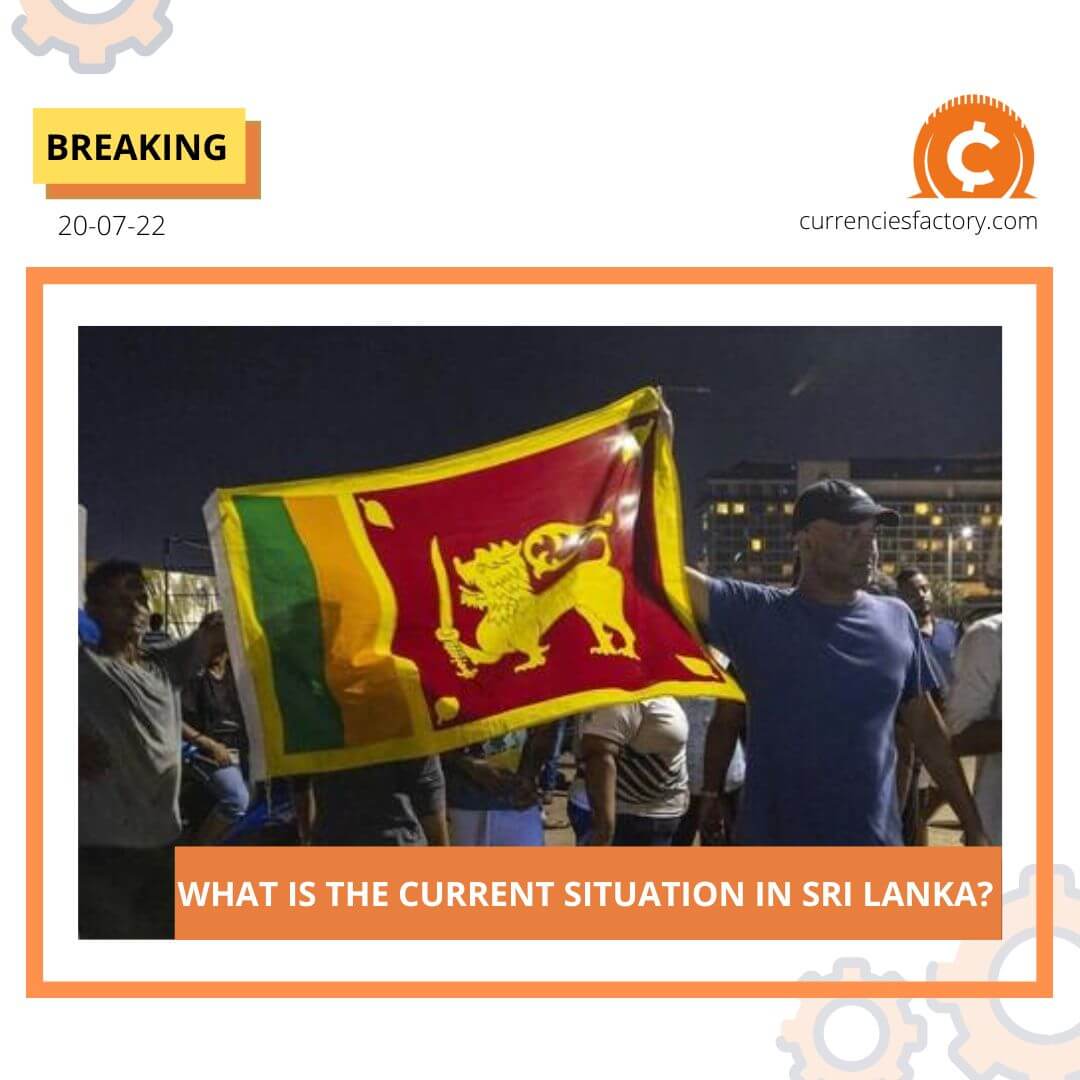 Demonstrators hold up a Sri Lankan flag after hearing news that President Gotabaya Rajapaksa, emailed a letter of resignation, at a protest site close to the president's office in Colombo, on Thursday.

On Friday, Abeywarden confirmed that he received Rajapaksa's resignation and said the legal process will follow.

The new President of Sri Lanka will be elected within a week.

The news of Rajapaksa stepping down brought a tenuous calm to Sri Lanka, which has been facing a severe economic crisis for months.

Sri Lanka’s economy, which has been faltering since 2020, is facing its worst economic crisis in over 70 years with inflation rising to record levels, food prices skyrocketing and government coffers running dry.

While the government blamed the pandemic for the debilitating economic situation, experts have said it was caused by political mismanagement and racking up debts with China.

The island nation first defaulted on its debts in May. On Sunday, Energy Minister Kanchana Wijesekera told BBC the country had only enough petrol left for less than a day under regular demand. - hindustantimes.com

Discussion with others: What is going to happen next in Sri Lanka?

Sri Lanka is in talks with India, Japan, and China to form an aid consortium amid ongoing talks with the IMF. 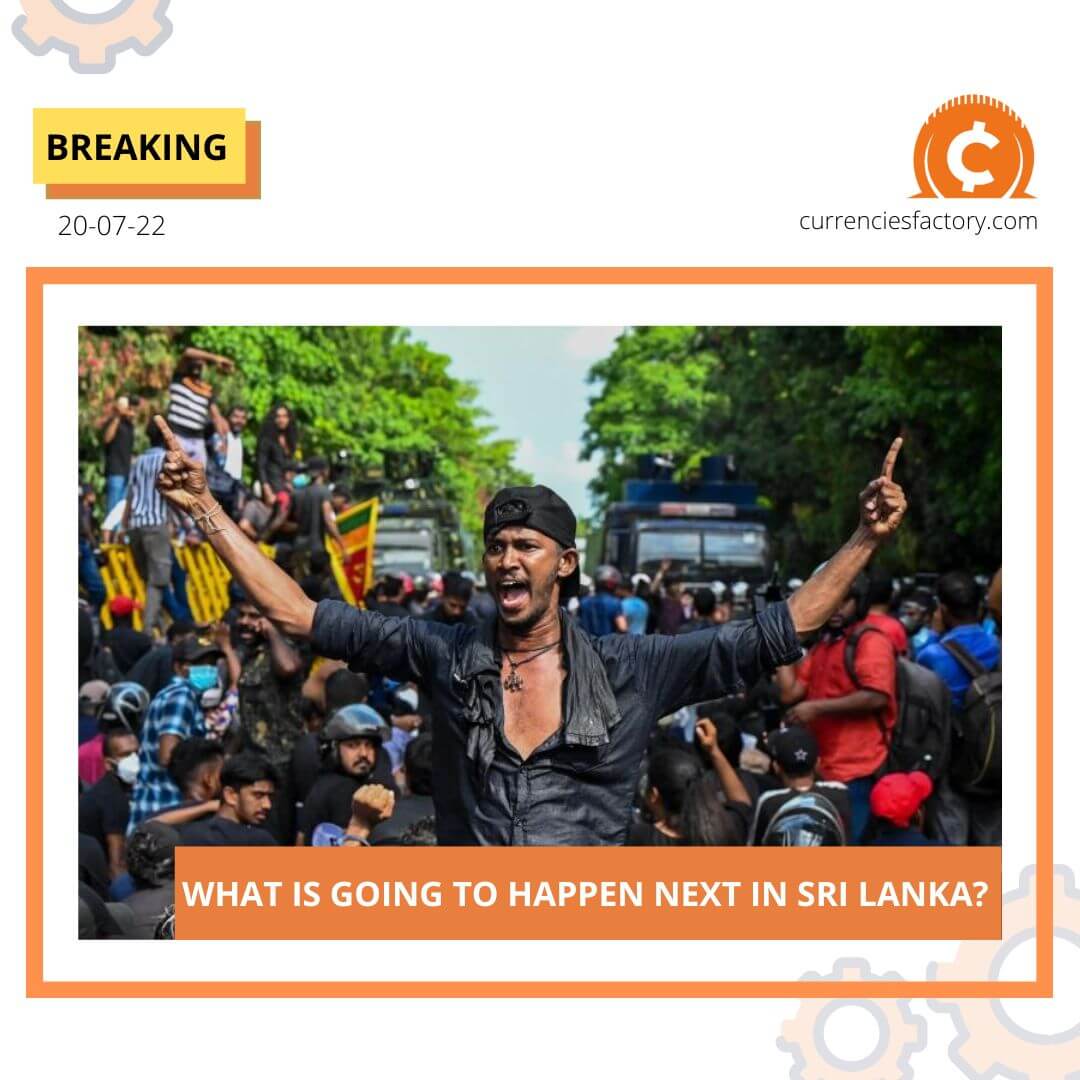 Till now, India has provided around $3 billion worth of assistance to Sri Lanka, including a $400 million swap and credit lines totalling $1.5 billion.

On Wednesday, Sri Lankan President Gotabaya Rajapaksa had tweeted that he had sought assistance from Russian President Vladimir Putin, asking him for an “offer of credit support to import fuel." - cnbctv18.com

How can Sri Lanka recover from economic collapse?

A bailout from the International Monetary Fund will be critical in stabilizing Sri Lanka's finances but critics say the Indian Ocean island needs to tackle food insecurity and political instability first.

Sri Lanka's new president, set to be elected by parliament on Wednesday, will have a mammoth task in guiding the country out of its economic crisis. 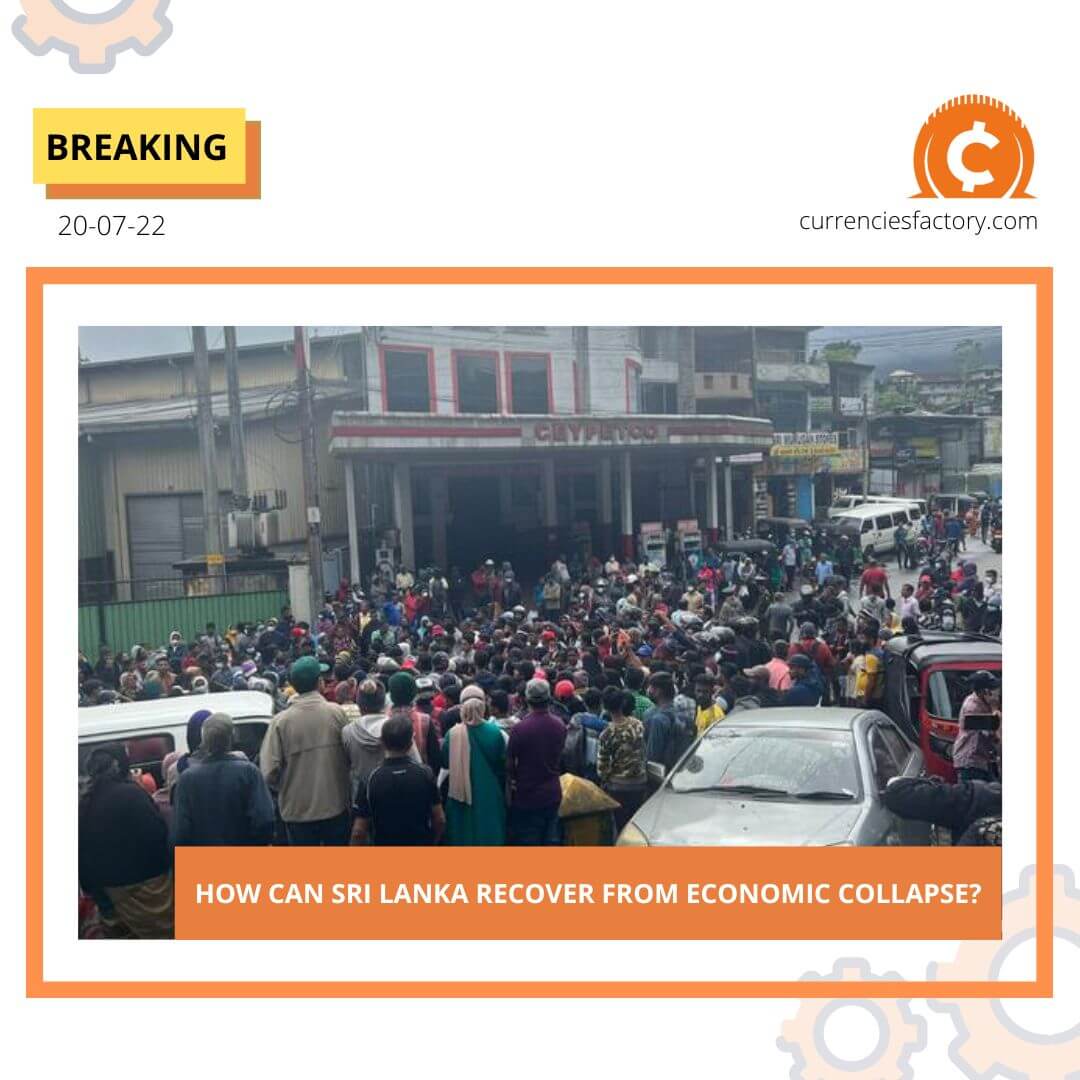 The Indian Ocean island's debt-laden economy collapsed after it ran out of money to pay for food, fuel and medicine — sparking months of protests.

The government owes $51 billion (€50 billion) and is struggling to make interest payments on those loans, let alone pay down the principal.

Many analysts have blamed years of mismanagement and corruption for the meltdown, including reckless borrowing from China, which was used to fund infrastructure projects that turned into white elephants.

The debt crisis was exacerbated by several other policy blunders, including deep tax cuts introduced just months before COVID-19 hit and an abrupt transition to organic farming that saw crop yields plummet.

A massive drop in tourism revenue — a vital source of foreign exchange — following the 2019 Easter terrorist attacks and during the pandemic, made matters far worse.

The economy is on course to contract by as much as 8% this year, while the cost of many food products and fuel has tripled and currency has collapsed by 80%. - dw.com

Can IMF bailout be secured?

The first priority for the new government will be to restructure Sri Lanka's huge debts.

Negotiations for a bailout from the International Monetary Fund (IMF) are already underway but they will require further restructuring of existing IMF loans as well as others from China, India and Japan. 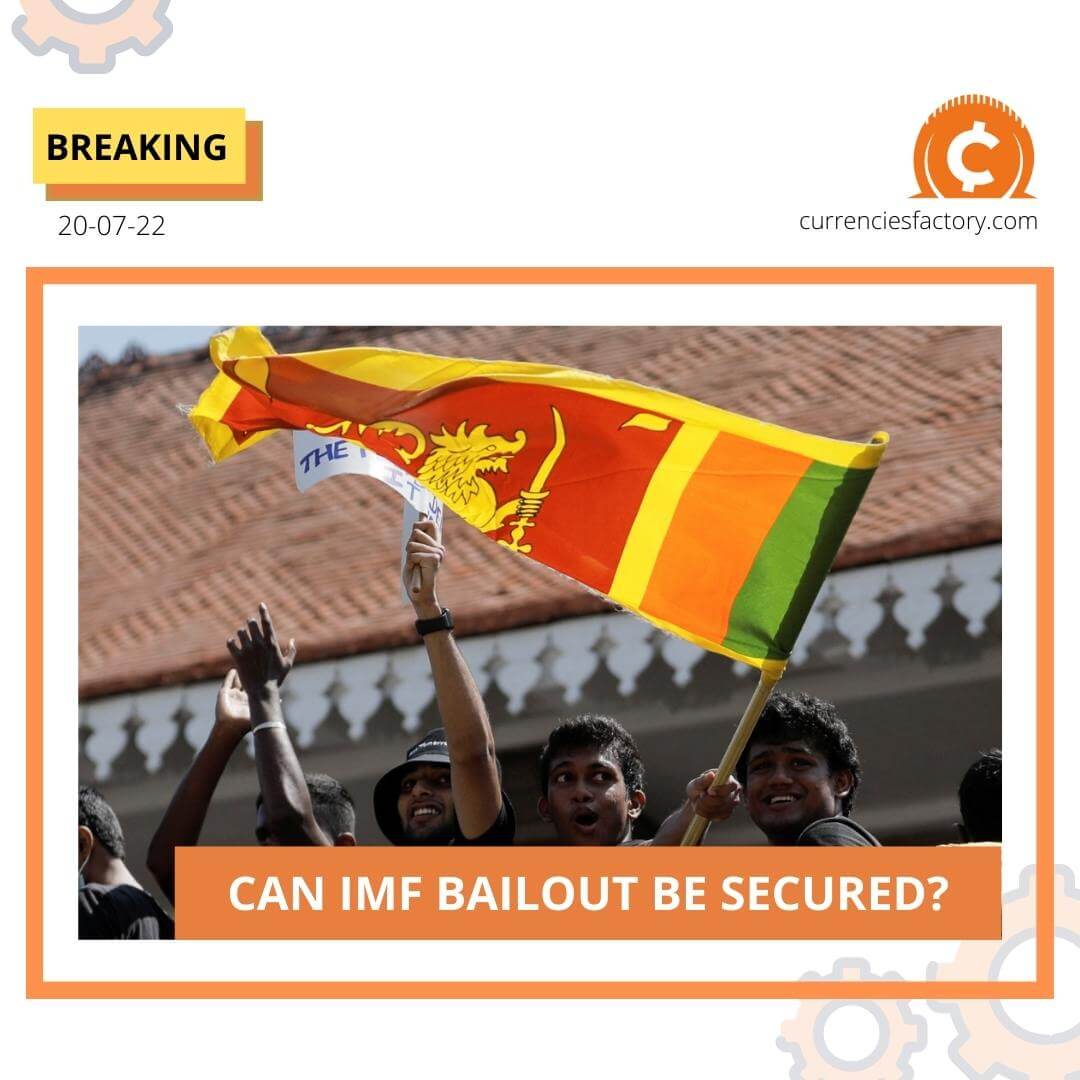 Any rescue package is likely to come with strings attached, including the privatization of state-owned enterprises and deeper austerity measures.

"The reality is that people can't take any more austerity," Ahilan Kadirgamar, a political economist at the University of Jaffna, told DW. "Many people have no cushion whatsoever," he said, adding that nearly two-thirds of Sri Lankans work in the informal economy.

Kadirgamar is skeptical about an IMF bailout, saying that Colombo will struggle to boost its external debt going forward as the cost of capital will be too high for a country that has just defaulted. - dw.com

On June 21, tuk-tuks, motorbikes, cars, and buses lined up at a fuel station on the edge of Colombo’s Kurunduwatta, a neighborhood of tree-lined streets and old mansions.

While the tuk-tuk drivers chatted with each other as they stood around near their three-wheelers, motorcyclists doom-scrolled on their phones, flies, and mosquitoes buzzing around them in the scorching heat.

They had all taken time out of their jobs and daily responsibilities to wait for hours—even days—to fill their tanks.

The country’s fuel supply has been limited since May, but in recent weeks, the shortage has escalated into a full-blown crisis.

On June 27, the government announced that the country had little fuel left, and it reserved supplies for essential services such as public transit and the health sector, restricting it for all others.

Schools have been shut. Interprovincial bus services are limited. Many people have been asked to work remotely.

The country has come to a standstill until the next gasoline shipment arrives on July 22.

As Vagisha Gunasekara, an economist at the United Nations Development Program in Sri Lanka, put it, “the fuel crisis has paralyzed the economy.”

The fuel shortages are just one part of an economic crisis that has upended daily life in the country.

For months, Sri Lankans have faced shortages of fuel, gas, and medicine, as well as skyrocketing inflation—now around 55 percent—that has drastically increased the cost of living.

In response, people around the country have been protesting since April.

On July 9, they stormed into and occupied the official residences and offices of both President Gotabaya Rajapaksa and Prime Minister Ranil Wickremesinghe, causing both to announce their intentions to resign. - Foreignpolicy.com

Who can be the next prime minister of Sri Lanka?

Sri Lanka’s prime minister and acting president, Ranil Wickremesinghe, will face two rivals in a parliamentary vote Wednesday on who will succeed the ousted leader who fled the country last week amid huge protests triggered by its economic collapse.

Wickremesinghe, a six-time prime minister, is a seasoned politician with wide experience in diplomatic and international affairs and has been leading crucial talks on an economic bailout package with the International Monetary Fund. 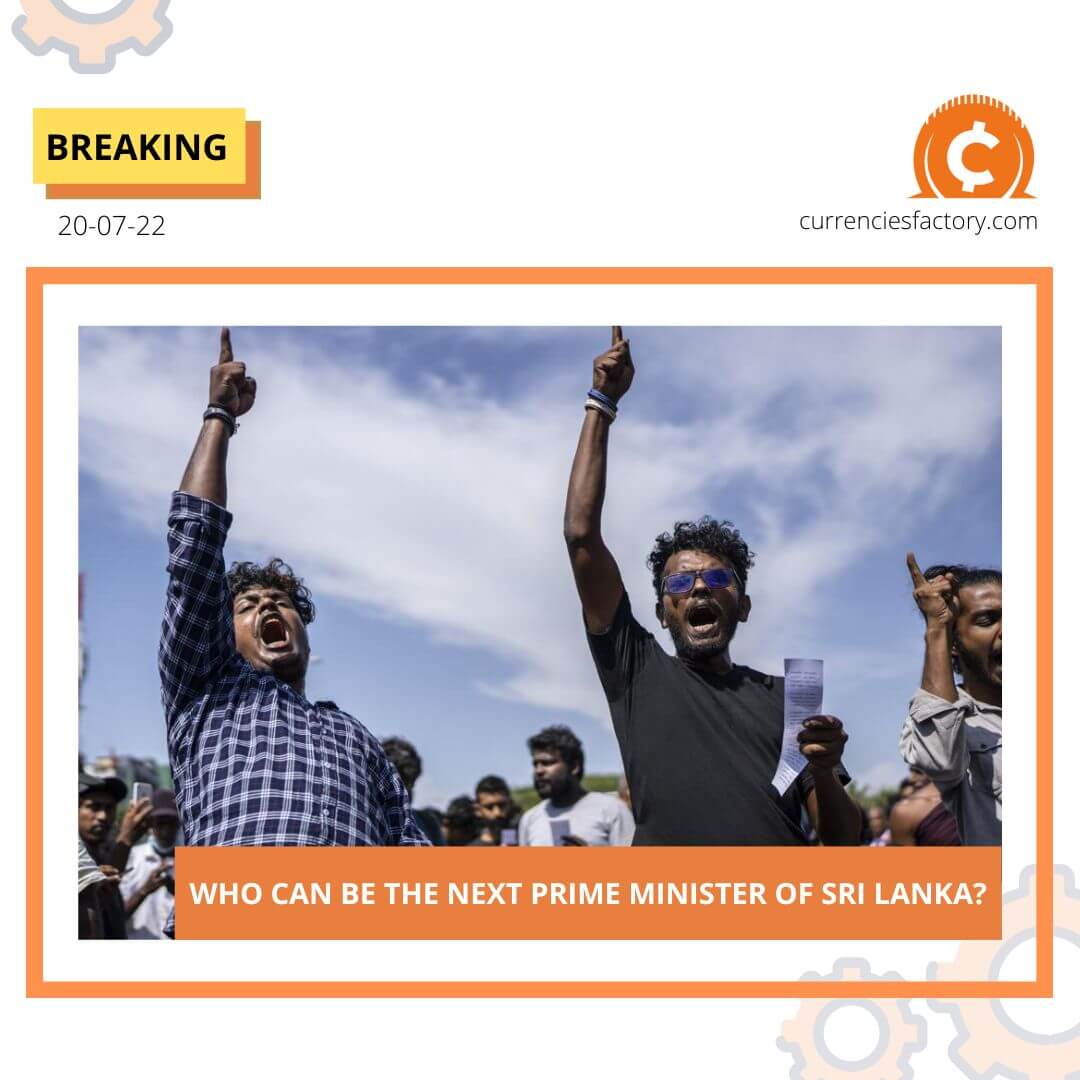 Opponents of Wickremesinghe’s candidacy fear he represents an extension of the Rajapaksa rule and a potential comeback for the beleaguered political family.

Even though he is a former government spokesman and has served in various posts including minister of information and mass media, minister of sports and minister of power under previous governments he previously was not considered for top leadership posts.

It is preparing a loan restructuring plan as a prelude to talks. - apnews.com