Historical data calculates Bitcoin's next 10x price surge only in two years, but analyst Peter Brandt is not convinced.

New data argues that Bitcoin (BTC) may track sideways for another two years before reigniting its bull run.

In a tweet on April 6, veteran trader Peter Brandt highlighted historical patterns, suggesting that hodlers will have to wait until 2024 for their next moonshot.

Bitcoin has surprised analysts with its performance over the past year, as the highly anticipated "blow-off" top in Q4 2021 was much lower than expected.

After BTC/USD lost over 50% of those modest new all-time highs, the debate around the relationship of price to Bitcoin's four-year halving cycles changed.

As Cointelegraph recently reported, the market was used to a macro price top coming once per four-year cycle, specifically the year after each of Bitcoin's block subsidy halving events.

Now, however, the price action is less predictable. While the factors controlling it are many and varied, it does not necessarily mean that bulls will get their break at a different point in the current cycle.

Brandt's data shows that the next impulse wave for Bitcoin may not be until May 2024 — which almost exactly lines up with the next block subsidy halving.

Historically, this would be a year too early for a blow-off top, but it could still deliver a 10-times price increase based on historical patterns which go beyond halving cycles.

"The past two times BTC advanced 10X or more required an average of 33 months before the next stage of the rocket kicked in," Brandt explained.

"If history repeats itself (which I do not believe it will), the next rocket stage will be ignited in May 2024." 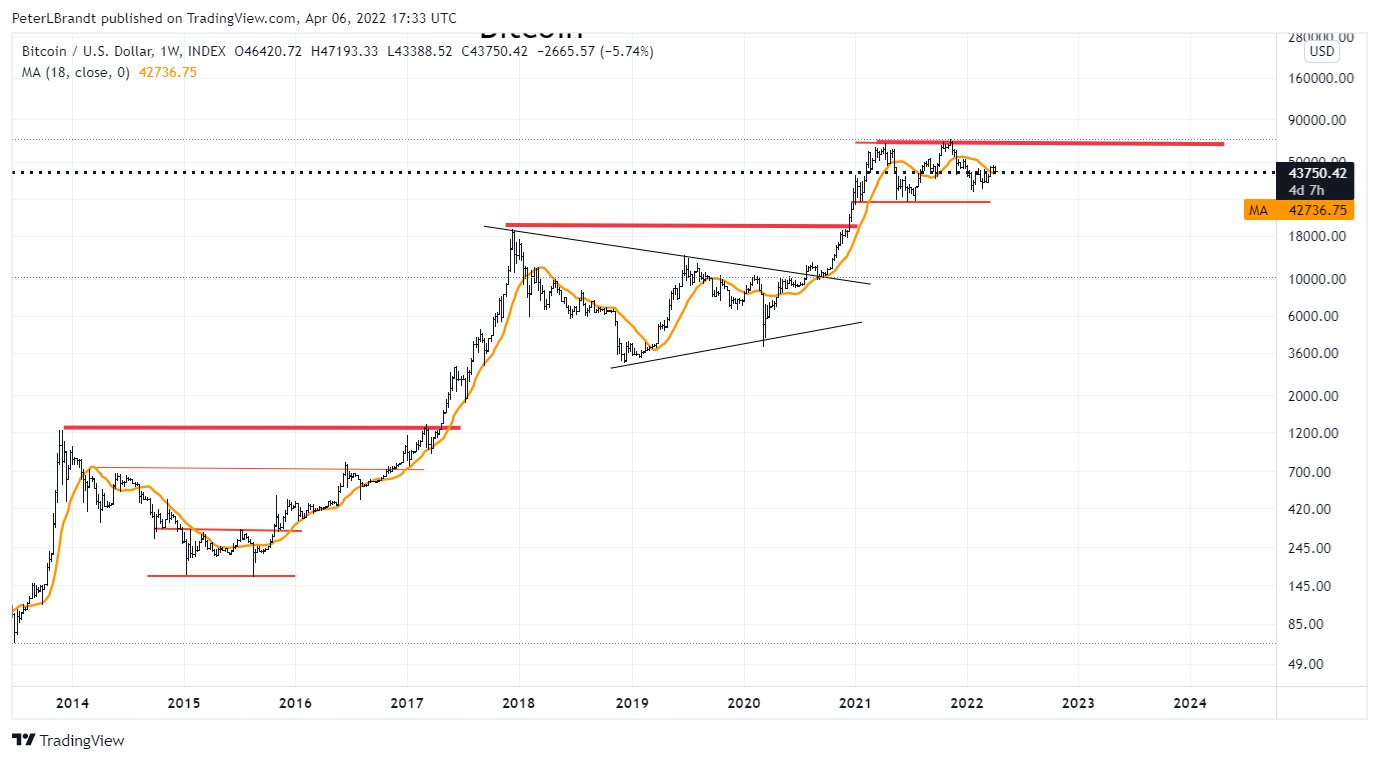 One Step At A Time

Analysts have pointed the finger overwhelmingly at macro triggers in terms of what could keep Bitcoin suppressed until then.

Central bank tightening, if successful, should logically pressure risk assets. At the same time, a prolonged period of high inflation and low-interest rates likewise paints a gloomy picture for Bitcoin — at least in the short term.

Further out, the status quo could change once the initial shock of these events subsides. Both Arthur Hayes, ex-CEO of exchange BitMEX, and Bloomberg analyst Mike McGlone are conspicuously more confident about Bitcoin on longer timeframes than in the coming months.

"BTC is a risk-on safehaven. Gold is a risk-off safehaven. Bitcoin as an untested theoretical safehaven, this year will be the first proper market test of it," statistician Willy Woo forecasted in February about the 2022 outlook.