Bitcoin Fails to Beat Resistance As $40K Stays Out of Reach Into The Weekly Close!

A dark week looms for macro markets while the weekend succeeds in providing some respite for crypto traders.

Bitcoin (BTC) faced down $40,000 on Feb. 27 as hopes for the weekly close hinged on avoiding a fourth red monthly candle in a row.

Data from Cointelegraph Markets Pro and TradingView showed BTC/USD making several attempts to break out of the $30,000-$40,000 corridor Sunday, all of which ended in rejection.

The pair had stayed broadly higher throughout the weekend, cutting traders some slack after a week of volatility at the hands of geopolitics and media headlines.

Now, $38,500 was the level to watch for Bitcoin to close out the week and the month — failure to do so would mean a fourth straight monthly red candle.

As Cointelegraph reported, bulls were spared a lower low last week, despite the downside move on the Ukraine invasion, bottoming out at $34,300 versus $32,800 in January.

"Cautiously optimistic this is a short to mid-term bottom for BTC," popular trader and analyst Pentoshi continued.

"I pulled my 40.3k orders (not great) and will focus higher to 41.6k for de-risking. Must flip that and there's some pretty decent upside. I am still cautious bc the macro landscape imo is anything but bullish."

That macro landscape was poised to deliver a fresh bout of uncertainty on Monday's open thanks to moves by the West to cut Russian banks off from off-shore liquidity and the SWIFT payment system.

A mention of Russia's nuclear deterrent by president Vladimir Putin likewise ruffled feathers over the weekend, with Ukraine and Russia beginning negotiations on the Belarusian border Sunday.

For Bitcoin proponents, meanwhile, the potential knock-on impact of Russian financial sanctions and the cryptocurrency's status as a neutral network for value transfer began to take center stage.

"This is a financial neutron bomb. Bankrupts people without blowing up buildings. Hits all 145M Russians at once, every ruble holder.

In a maximalist scenario, the possible collapse of the Russian economy." On its part, Ukraine began to accept donations for its army in Bitcoin, Ether (ETH), and Tether (USDT).

For crypto markets overall, however, there were few opportunities as sentiment remained very much in "wait and see" mode.

Out of the top ten cryptocurrencies by market cap, none managed noticeable moves up or down over the past 24 hours. 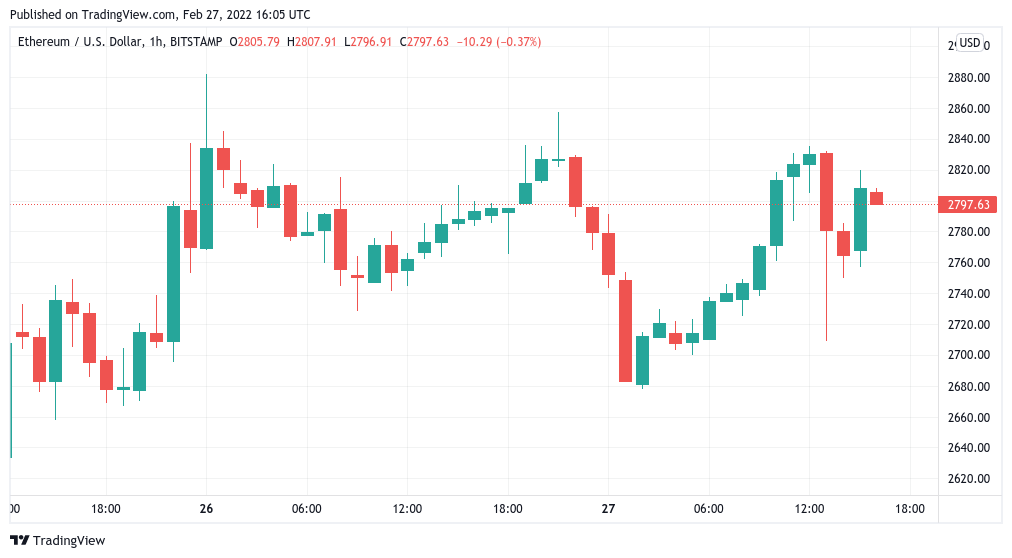 ETH/USD traded at near $2,800, with weekly gains nonetheless approaching 6%.